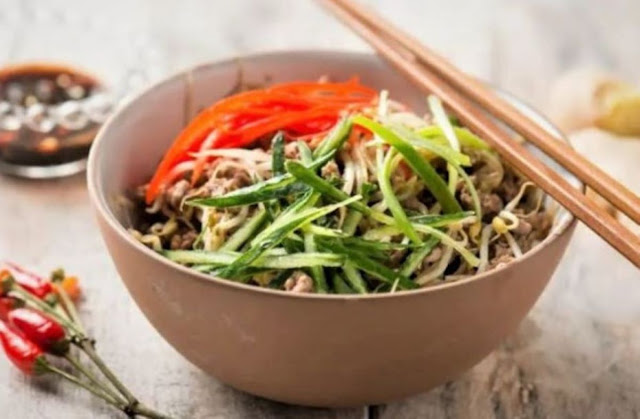 Why is the Beef Salad Bowl so nutritious?

The Beef Salad Bowl is an exponent of the “Salad Bowl” category, that is a series of American brand dishes that aim to bring together gastronomic elements from multiple cultures, and in particular those that form the United States’ ethnic kaleidoscope. It is a concept, even before a gastronomic trend. A concept that speaks of integration, but which also suggests a change of pace in the way of understanding the kitchen and nutrition. To characterize the Salad Bowl, in fact, is the wealth from the nutritional point of view. The goal is to go beyond the idea of ​​”salad” and indeed offer a balanced and complete meal. The Beef Salad Bowl, of course, is no exception.
This dish, which appears as a large and abundant salad, stands out for its variety from a nutritional point of view. There is a wide range of proteins, guaranteed by beef. Soybeans, on the other hand, provide both proteins and carbohydrates. The rest, including sesame present in the form of oil, guarantees vitamins, minerals and other fundamental nutrients. The fusion element, which as I have already mentioned, characterizes all the Salad Bowl, is determined by the presence of the aforementioned bean sprouts, which recall the oriental culture. In principle, we can consider this Beef Salad Bowl as a complete dish, not even very fatty (the amount of oil and fat added is minimal), certainly foreign to Mediterranean culture but also worthy of being consumed by purists of Italian cuisine.
All the benefits of bean sprouts
Bean sprouts, used in our Beef Salad Bowl, represent oriental culture since they are traditionally consumed mainly in China, Korea and Japan. It must be said, however, that by now the soybean is well known and appreciated all over the world. To determine this spread there is the easy availability in all periods of the year, it’s biological cycle is therefore not tied to seasonality. 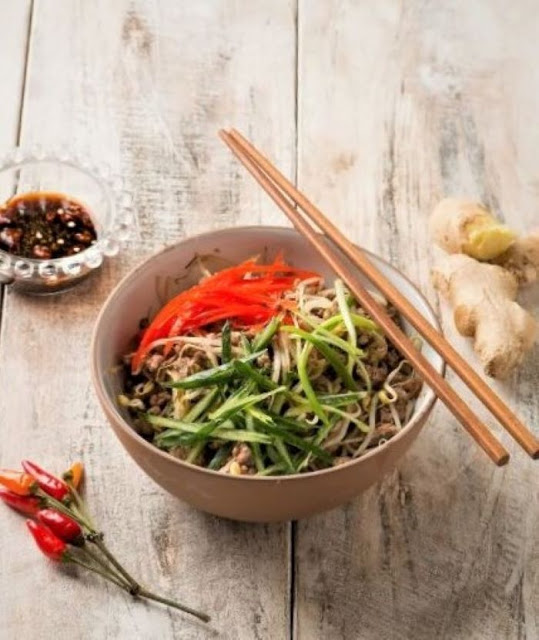 Its popularity is also given by the pleasant taste for all palates and the richness from a nutritional point of view. Soy, and in particular sprouts, is characterized by a rare balance between protein, lipid and carbohydrate components. It is also rich in vitamins and minerals, including B vitamins, C, potassium and calcium.
As regards its intrinsic properties, it can be said that soybean, being rich in lecithin, lowers cholesterol levels and reduces the risk of pathologies of the cardiovascular system. The high amount of fibre also helps to regularize the intestine. Some recent research has also shown the anticancer properties of this legume. Obviously, the calorie intake is minimal, there is talk of about 49 kcal per 100 grams.
You may be interested to read Tiramisu muffin recipe/ Oatmeal yoghurt cups recipe/ White melon jam recipe/ Sakura Mochi recipe.
Why did we use coconut sugar?
A key ingredient in the Beef Salad Bowl is coconut sugar. In particular, it intervenes in the marinating phase. Its function is to marinate the other ingredients together, but also to flavour the meat. However, it is made from coconut flowers rather than from coconut itself.
It is considered an excellent natural sweetener, excellent as a substitute for real sugar since it does not have a high glycemic index. This is excellent news for everyone, but especially for those who are supporting a diet and especially for diabetics. Its taste is truly special. Coconut sugar sweetens, but also flavours. Compared to traditional sugar, in fact, it has a more intense and fruity flavour with hints tending to caramel.
Here is the Beef Salad Bowl recipe:
Ingredients for 4 people:
500 g of minced beef;½ tablespoon of sesame oil;250 g of bean sprouts;3 tablespoons of lime juice;Salt to taste;Pepper as needed.
For the marinade:
2 spoons of sesame oil;2 tablespoons of soy sauce;1 tablespoon of coconut sugar;2 cloves of garlic;Chilli pepper to taste
For the salad:
1 cucumber;1 red pepper;2 tablespoons of apple cider vinegar;1 tablespoon of sesame oil;3 spring onions;1 tablespoon of soy sauce;1 spoonful of honey;Salt to taste.
Preparation:
For the preparation of the Beef Salad Bowl, start by taking a bowl and putting all the ingredients dedicated to the marinade inside, mix carefully and divide the mixture into two bowls. Dip the beef in a bowl, then marinate it for a quarter of an hour. The other bowl instead put it aside temporarily. Now take a non-stick pan, heat the sesame oil and brown the meat for about 5 minutes, then add the bean sprouts and the lime juice. Finally, also pour the marinade liquid set aside in the second bowl and mix.
Wash and peel the spring onions and cucumber, then cut them into thin slices. Do the same with the pepper, but cut it into julienne strips. In a bowl add the soy sauce, apple cider vinegar, oil, honey, salt and emulsify. Add the spring onions, stir and leave to rest for about 5 minutes. Finally complete the dish by adding cucumber, pepper and meat. Enjoy your meal!