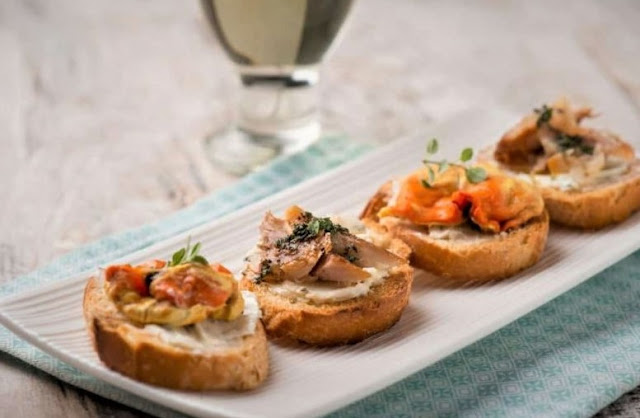 Crostini with smoked mackerel, colour and taste for a delicate appetizer

Crostini with smoked mackerel are small appetizers able to satisfy the palate and the sight. Among other things, they are also the classic appetizers that allow you to make a good impression in the presence of your diners. Firstly because they are simply delicious, secondly because they offer unusual scents. In fact, they are the result of uncommon combinations neither within the starters category nor among the first or second courses. In short, these crostini with smoked mackerel represent something new, which certainly will not fail to tantalize the palate. True, in some cases the ingredients are not so available. The reference is above all to the spinal, a fish preparation that I will deepen in the next paragraph. However, the recipe is really simple, in fact, it involves simply composing the croutons.

The only element of difficulty, if you can call it that, concerns the creation of the emulsion, which is a large part of the dressing of this appetizer. Not that the emulsion used for these croutons is particularly bizarre, it is simply necessary to pay close attention to the doses and the proportion between the ingredients. To be precise, the emulsion must be made with a simple oil, thyme and garlic. Another peculiarity of this recipe consists of the two proposed variants, one with smoked mackerel and emulsion, the other with the aforementioned spinach and a drizzle of oil.

The contribution of Hellenic Excellence in crostini with smoked mackerel

The main ingredients of these crostini with smoked mackerel are the Hellenic Excellence brand, a new brand which is entering the Italian and European markets. The purpose of the brand is to enhance Greek gastronomy, offering the wonders of the territory and the sea even beyond national borders. Both the smoked mackerel and the spinialo of Hellenic Excellence set a standard in reference to fish preparations. To tell the truth, there is little to say about mackerel, as everyone has tasted it at least once in their life. However, its nutritional power should be noted, which is expressed above all in a certain abundance of good fats, such as omega-three, and mineral salts, in particular phosphorus.

Apparently different speech for the spinialo, which I am sure you have never heard of. Well, it is a preparation based on fouske marinated in seawater. The folks are very tasty and soft small marine invertebrates. Spinialo amazes for its flavour, for its sapidity and in general for its ability to evoke the salty scents of the sea. Another element worthy of attention concerns the caloric intake of the smoked mackerel and the spinialo of Hellenic Excellence. Despite the presence of fats, which in any case are beneficial, both products are characterized by a very minimal caloric intake, which does not weigh down the croutons.

Garlic butter, an ingredient with a great impact

Another particular ingredient of crostini with smoked mackerel is garlic butter. The presence of garlic should not scare you, in fact, the doses are so small that they do not cause any side effects. The collective imagination is associated with the bad reputation of garlic, and in particular of raw garlic. However, garlic butter is a truly delicious condiment and can be used on many occasions to create delicious appetizers.

Garlic butter can be bought at the supermarket, but it can also be easily prepared at home. I advise you to prepare it completely independently, first of all, because it will certainly be more genuine, secondly because you will derive greater satisfaction. It is very trivial to work a normal stick of butter into an ointment and mix it with finely chopped garlic if possible reduced in the batter.

Here is the recipe for crostini with smoked mackerel:

1 baguette or bread allowed in slices,

To prepare the crostini with smoked mackerel, start by making the emulsion by mixing together the olive oil, chopped thyme and squeezing garlic (to be made with the appropriate tool). Then make fillets from the smoked mackerel of Hellenic Excellence, as long as the fillets are not already cut and ready to use.

Now give the spine a good rinse and cut it into small pieces. Finally, slice the baguette and spread the garlic butter on top. On one part of the slices lay the mackerel and the emulsion you have prepared. On the others, lay the spinialo cut into pieces and seasoned with a teaspoon of lemon and a little extra virgin olive oil.