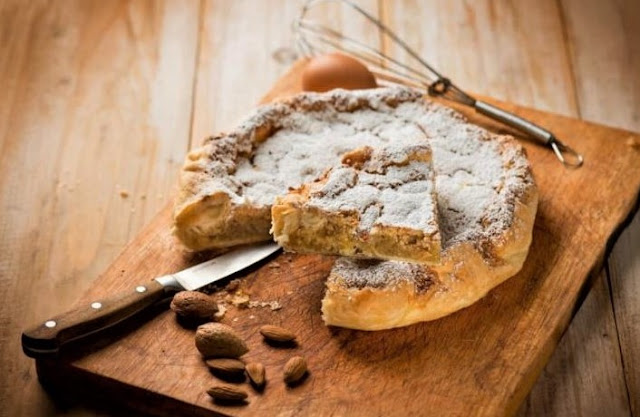 The Greek Mantuan cake is an adaptation of the classic Greek cake. Even this variant boasts a long tradition, to the point that, despite its clear Hellenic origins, it can be considered a Lombard dish. Incidentally, the Greek cake is made with almonds, but also with phyllo dough. The Mantuan version, on the other hand, uses the most common puff pastry. In addition, it has a partially different topping, while the mixture, which acts as a filling, has remained the same. The main feature of the Greek Mantuan cake, as of the Greek cake proper, consists of a filling that, for consistency and body, is more reminiscent of a dough.

It is, in fact, a “dry” cake, a little heavy at first glance, and rich in taste. However, and this is certainly an advantage, it is also very simple to prepare. The credit for this goes to the realization of the base, which consists simply in rolling out the puff pastry well. The only trick is to always leave a wide edge, also because it must be folded so that it at least partially covers the filling. For the rest, the ingredients are really available: sugar, eggs and almonds. I will talk about these in the next paragraph.

All the nutritional benefits of almonds

Almonds are the real stars of the Greek Mantuan cake (as they are in the original variant). They work in three ways: chopped (to add to the filling), in the form of flour and whole to make the garnish. It is for this reason that, by many, the Greek cake is considered to all intents and purposes an almond cake. Their presence, too massive, is really pleasant and boasts excellent nutritional properties, which are very respectable. Of course, almonds are caloric, on the other hand, they are close to 600 kcal per 100 grams. And they are also rich in fats, but they are good fats, which are beneficial to the body. The reference is to omega-three, which have a positive impact on the cardiovascular system, on visual and cognitive function.

Almonds, then, are among the foods with the highest fibre content (about 12%). Concentrations of vitamins and minerals are also excellent. The reference is in particular to vitamin E, calcium, magnesium and iron. Finally, almonds are also known as anti-cholesterol foods and capable of providing a certain amount of antioxidants. Some studies also show that almonds help keep blood sugar at bay.

Almonds are a recurring food not only in our Greek Mantuan cake but also in many Western gastronomic traditions. They stand out for their versatility, they are also excellent on their own, but also as an ingredient in desserts, especially for toppings. With almonds, you can also make a particular flour, which is characterized by good baking skills and, above all, by the total absence of gluten. They can be transformed into a tasty and refreshing drink, the famous almond milk.

A simple but effective decoration 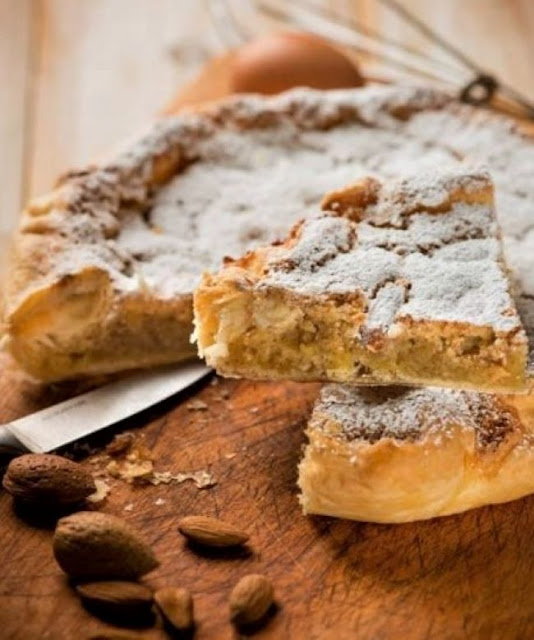 What distinguishes the Greek Mantuan cake from the original Greek cake is also the decoration. It is quite unique, also because it takes place in two steps. The first is even prior to cooking and consists of placing the shelled almonds on the surface of the cake. Following a wide passage in the oven, the almonds will appear practically toasted and therefore even tastier.

The second phase concludes the preparation, and consists in the “simple” application of icing sugar, as required by the Italian confectionery tradition. Of course, you decide the amount of powdered sugar, depending on your taste. The Greek Mantuan cake, also thanks to these decorations, is more full-bodied and richer in taste than the original version.

Here is the recipe for the Greek Mantuan cake:

You may be interested to read bean and tuna salad recipe/ croquettes of polenta and cheese recipe.

To prepare the Greek Mantuan cake, start by rolling out the puff pastry in a baking tray covered with parchment paper. However, spread it out so that it overflows by about 5 cm. Add the egg yolks and three tablespoons of granulated sugar in a bowl, then mix and beat well to obtain a frothy cream. Finely chop the almonds and mix them with the remaining sugar. Now melt the butter on the stove, then let it cool slightly.

In a separate bowl, combine the frothy cream with the melted butter and almond flour, then manipulate to form a homogeneous mixture. Finally, add the whipped egg whites and distribute the mixture thus obtained on the puff pastry, tucking the flaps in order to reproduce a wavy effect. Finish the preparation by decorating the surface with whole shelled almonds. Bake in the oven for about 40 minutes at 160 degrees. To conclude, give a generous sprinkling of icing sugar and serve.